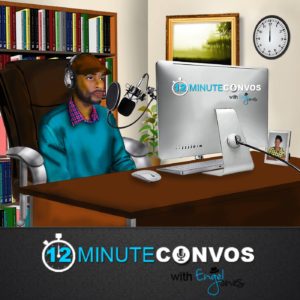 Back in December, I was invited to be interviewed by Engel Jones of 12 Minute Convos podcast fame.  I enthusiastically agreed and sat for an interview with him.  I was impressed with his professionalism, his enthusiastic attitude, and his dedication to podcasting.

He told me after the interview that it would be published sometime mid January and here is the link to it on his website.  I hope you enjoy it.

One of the things I learned from the interview with him are the “under the hood” steps needed to take to conduct interviews – something I’ve been thinking about doing here at HHHR and hope to do in the near future.

It seems that almost every certified HR leader has an opinion about SHRM’s abandoning their support of HRCI’s certifications and rolling out their own.  The vast majority of what I’ve read or heard is critical of SHRM and supportive of HRCI.

Frankly, I think SHRM’s entry into the space is a good thing.  A very good thing.  I am a believer in free market competition and I think having two HR certification competitors battle it out will only make it better for the profession in the end.

Case in point, HRCI has already responded by increasing their marketing.  I see them advertising everywhere in all the prominent HR magazines and websites.  Maybe they advertised this heavily before, but I doubt it.  Monopolies don’t need to advertise and market.

I received a letter from HRCI on August 1 reminding me of the value of their certificates and promised that I will be hearing back from them soon about how they are “shaping the future of HR certification and providing me with new opportunities to connect with other HR professionals within our community.”  I was impressed.  The letter sends the signal that they are clearly working hard to maintain their status as the Certificate of Choice!

I even received a tweet from Rebecca Hastings, the HRCI HR Content Manager, asking me if I had read this article at the HRCI website.  She was responding to my post here where I said I was OK with two certifications.

This is all very good.  They are being very smart by getting out there when they are still the only game in town to aggressively promote and market their products.

Let’s be honest about the value of our certification.  Its really only important to those of us in HR.   The executives in our companies don’t really know anything about HRCI and their certifications.  For example, my boss was very supportive when I told him I earned my SPHR but he didn’t really know or understand what it meant.  I had to give him a print out from their website describing the SPHR certification to help explain it to him and “prove” that it was a significant accomplishment.

The other executives in my organization also don’t really know and understand what it is.  In fact, I get the impression they think it’s “cute” that HR has a certification.  But, in their minds, it doesn’t rise to the level of a CPA (Certified Public Accountant), PE (Professional Engineer), or a PG (Professional Geologist).

With the two organizations fighting for prominence, I’m hoping there is a lot of press outside of the HR media platforms.  If so, our company executives will see this and take notice and realize that there are important professional certifications in the HR profession.  Rather than think the competition is hurting our profession, I think most of our executives will understand and appreciate it.

Here are the four reasons I think it’s a good thing to have competing certifications.

I’m going to watch this all with a great deal of interest.  I am not taking sides.  I love my SPHR.  I worked hard for it and am proud to sport those letters whenever I can.  On the other hand, I also love the fact that SHRM is going to shake things up and challenge the status quo.

I will maintain my SPHR and I will go through the process of earning my SHRM–SCP early in 2015.  I will also proudly sport both sets of initials after my name.  I will fully support both because I think both are important and that the upcoming battle between the two organizations will ultimately benefit the HR profession.

Today, I am very excited to introduce the very first tool for the Hard Hat HR Tool Belt – 8 Tactical Actions to Help Build Your Online Presence.

In today’s highly competitive and connected world, it is critical for HR leaders to have excellent online visibility. The best way to gain this visibility is to build a strong and cohesive Online Brand Presence by carefully following the 8 tactical actions detailed in this guide.

Once established, your online presence will gain you a great deal of credibility. You will be seen as an HR expert and thought leader by your current employer as well as any potential future employers. This can lead to possible career advancement and financial rewards!

You can get the download here.  The tool is completely free and all I ask, in exchange, is for your email address so I can stay in touch with you with the HHHR Update and you can be first in line for future tools.