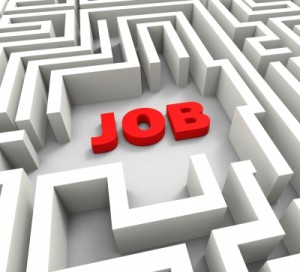 Today, I’m going to tell you a little story about my middle child and how she landed an amazing job in the tech industry before she graduated from college during her senior year.  There was a lot of hard work on her part studying hard and building relationships with her professors and advisers but there was also some chance in the events that led to what she is doing now in her first career.

At her university, like all universities, they have a series of job fairs for graduating seniors.  She attended all the job fairs the university hosted and spent time preparing for each by looking over the list of companies and deciding which ones she was interested in talking to.   I would chuckle when she would call me and ask me if I had heard about certain companies like Boeing and Burlington Northern.

When she arrived at one particular job fair, she spotted a booth at the front of the room but didn’t recognize the company.  It wasn’t on her list of companies she identified the night before but it was a pretty fancy booth so she decided to stop by and talk to the recruiter.  She figured she would take the opportunity to just to get warmed up and get a little real life practice before she started to get serious about talking to the companies she was really interested in.

My daughter ended up having a very good conversation with the recruiter and found out what the company did and that they were looking for some administrative positions in their corporate headquarters and trainers for their software implementations.   But she left the booth without leaving the recruiter a resume!  She figured she was just getting in some practice before starting to get serious with the companies she was targeting.  Later that evening she received a call from the recruiter who she spoke to at that first booth.  It turns out the recruiter was so impressed with my daughter during their conversation that she wanted to talk to her some more.  But she quickly realized that my daughter had left without leaving a resume so she started asking people in nearby booths who she was.  Fortunately, my daughter’s adviser was nearby and had seen the two talking and was able to give the recruiter her name and phone number.  She also had nothing but positive things to say about her.

The recruiter called my daughter that evening and scheduled a formal interview with her for the next day.  She apparently nailed the interview because the company flew her to their corporate office in Denver for a series of interviews.  There, two departments in the company interviewed her since she had expressed interest in both departments.   Ultimately, both departments wanted to hire her.  She found that out when the head of one of the departments actually called her at her hotel room and asked to take her to coffee that evening to talk to her again.  That department head told her this has never happened before – two departments vying for one candidate.   They had a nice conversation and the department head said that she would probably lose out to the other because that other department was more important and influential in the company.

Well, shortly after, she got a job offer from the more important and influential department.  The offer was extremely generous and I strongly recommended that she should absolutely accept.

She accepted the job and has now been working there for almost a year now.  She loves her work and is thankful that she decided to stop by at that first booth to practice before getting serious!

There are four clear takeaways from this story when you are out there job hunting.  First, explore all opportunities that are available.  You may not have ever heard of a particular company, but don’t let that stop you from interviewing with them.  There are more B2B and B2G companies out there that very few people have heard of but are just as prestigious to work for as any B2C company. Second,  relax and be yourself when you are interviewing.  My daughter wasn’t really trying hard to impress the recruiter in that first booth.  She was just there to warm up and practice and because of that she was behaving more naturally and like herself.  This obviously made a strong impression on the recruiter.  Enough so that she made the extra effort to find out who my daughter was and contact her for a formal interview.  Third, always leave your resume with every recruiter you talk to!  Most recruiters won’t take the time to figure out who you are if you didn’t. They talk to a lot of people at a job fair.  And finally, my daughter is awesome and I’m very proud of how hard she worked through college and her ability to start her career at a job she really loves.