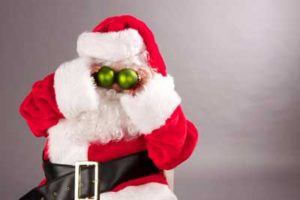 “He’s doing it again, Rich, and customers and employees are irritated with him” said Tina, my department manager.

“Are you serious?” I said  “I just had another talk with him a couple days ago and he promised me he would stop! I will talk to him again.”

Being the long time retail anchor in downtown Missoula, it was up to us to provide the “official” Santa Clause for the community.  Every parent wants to have a picture of their little one with St. Nick.

Up until then, I had no problem because I just simply hired the gentleman who had been doing it for the past decade, but this year he was no longer physically able to play the roll.  I had to find a new Santa and I hit the jackpot – I thought – when I discovered a professional birthday clown/Santa Clause looking for work!  He had experience, could tie balloon animals, and had his own Santa suit!

We set up his chair, the camera, and backdrop along a main aisle.  We ran an ad in the Missoulain and posted his hours throughout the store.  Now I could focus my attention and concentrate on executing the store’s Holiday sales, profit, credit, and customer service strategies.

Instead, we quickly discovered our new Santa had a very odd personality – one that my customers and employees found very irritating. Irritating enough to complain and avoid him.

He would make a strange comment or crack an awkward joke to everybody who walked by him – nothing inappropriate but strange.  It got to the point where my employees would take another longer route in order to avoid having to walk by him when they saw he didn’t have a kid on his lap.

I sat down with him in my office, with him in full costume, and had a “fierce conversation”  letting him know that I had received complaints and that he needs to concentrate more on being jolly and less on being irritating. He initially resisted but after I gave him several examples of his irritating behavior, he agreed that he would  try to do better.

This was Santa’s first warning.

I noticed an improvement in his behavior but that only lasted two days. He reverted back into his old irritating ways and the complaints started again.  I sat down with him again, again with him in full costume, and we had our second “fierce conversation” where I told him that he needs to alter his behavior quickly. He’s driving customers away and irritating my team causing a reduction in their productivity.  The critical Christmas season is short and I can’t afford to have Santa hurting my business.

This was Santa’s second warning.

Again, it took another two days before his behavior to reverted back to his irritating ways which led to the conversation at the beginning of this post.  Well, I had had enough and sat Santa Clause down in my office for the final time, again him in full costume, and said the words “I’m sorry, Santa, but I am going to have to let you go.  It’s just not working out.”

I had just fired Santa.

So now I had no Santa.  Now what?  Well, all I know is that the General Manager of the store (me) would mysteriously disappear whenever Santa showed up to for his shift…

This story points out that we occasionally have to do some very uncomfortable disciplinary action on employees or independent contractors.   I sure could have avoided dealing with the situation, he was Santa after all.  And he was only going to be in the store for a couple more weeks.

You have to have the courage to do what’s right.

Even if it’s firing Santa.