There will be no Audioblog Podcast today but I wanted to take a moment to write about Veteran’s Day and recognize both my dad, my grandpa, and all veterans on this very important holiday.

President Wilson proclaimed the first holiday on November 11, 1919.  Armistice Day is still recognized in many parts of the world but the day evolved into Veteran’s Day in the US in 1954.

First, I would like to recognize my dad who served in the Viet Nam war back in the late 1960s.  He spent a year there as an officer with a Combat Engineer Division.  He doesn’t talk about the time he served there but I know he was proud to have served his country.

Next, I would also like to recognize my grandpa who served in the Polish army officer during World War II and was captured by the German army during the 1939 Blitzkrieg of Poland.  Although he didn’t serve in the US Armed Forces, he was an Allied veteran and suffered in a German POW camp for six years.  He immigrated to the US immediately after the war and was a proud American until the day he passed away in 1986. 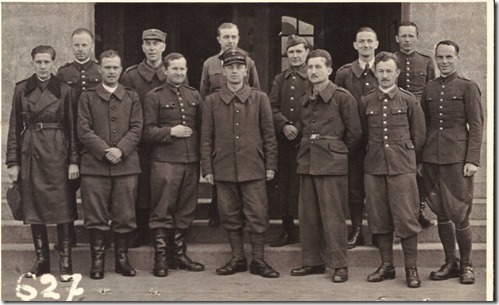 Col. William Zweck (center front) with his fellow POWs in 1942

Finally, I want to recognize all veterans for their sacrifice and for serving the United States and protecting our freedom and liberty.