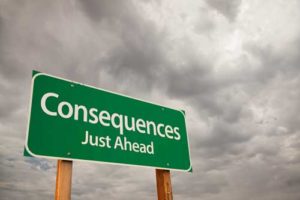 This week, I’m going to start discussing the importance of the Form I-9 (Don’t worry, I will continue the Metrics & Analytics Series. I just like to occasionally cover another topic from time to time). Nearly every single client that I visit fails to understand the importance of correctly filling out their I-9’s.

In fact, it is my understanding that many organizations don’t take it seriously. They are very sloppy about completing them correctly, if at all, and have no idea of the major liability they incur by not taking it seriously.

Let’s start by discussing what the Form I-9 is and why we have to fill it out.

From the U.S. Citizenship and Immigration Services (USCIS) website they explain it this way:

Form I-9 is used for verifying the identity and employment authorization of individuals hired for employment in the United States. All U.S. employers must ensure proper completion of Form I-9 for each individual they hire for employment in the United States. This includes citizens and noncitizens. Both employees and employers (or authorized representatives of the employer) must complete the form. On the form, an employee must attest to his or her employment authorization. The employee must also present his or her employer with acceptable documents evidencing identity and employment authorization. The employer must examine the employment eligibility and identity document(s) an employee presents to determine whether the document(s) reasonably appear to be genuine and to relate to the employee and record the document information on the Form I-9. The list of acceptable documents can be found on the last page of the form. Employers must retain Form I-9 for a designated period and make it available for inspection by authorized government officers.

The USCIS clearly states here that every employer in the U.S. must complete a Form I-9 for every employee they hire including citizens and noncitizens. There are no exceptions. There are also heavy fines and penalties for not complying with the requirement.

To give you an idea of how serious the fines are, let’s review what the USCIS has posted on their website:

2. For failing to comply with Form I-9 employment verification requirements (failing to fill out a form), the fines range from $216 to $2,156 per each form.

3. For committing or participating in document fraud for satisfying a requirement benefit of the employment verification process (knowingly accepting and attesting to fraudulent documents of an employee that prove they are authorized to work in the U.S.), the fines range from $445 to $3,563 for each document for the first offense and $3,563 to $8,908 per document for second and subsequent offenses.

4. For committing document abuse (specifying which documents the employee must use or requiring more documents then are legally required to verify they are authorized to work in the U.S. instead of allowing them to choose which documents to use from the list accompanying the Form I-9), the fines range from $178 to $1,782 per violation.

I’ve worked with clients that have several hundred employees who have no Form I-9s completed. They didn’t know or think it was important. I, of course, help them understand how important it is and get them into compliance as soon as possible.

Let’s walk through a fictional scenario with an employer who has 300 employees and has done a poor job of completing Form I-9s.

During an internal audit, they discovered that only 72 of the 300 employees have a Form I-9. These employees were hired in the early days of the company’s history when they had a good HR professional who understood the importance of the document. She left the company several years ago and the company didn’t replace her as they no longer thought HR was important and gave the HR responsibilities to different people in the subsequent years. First the payroll clerk, then the administrative assistant, then to the office manager, and so on.

None of them knew much about the Form I-9 and didn’t complete them when the company’s newly hired employees came on board. The result is 228 employees without a Form I-9.

I’ve just focused on the failure to complete Form I-9’s in the above scenario. There is also a huge liability issue with Form I-9’s with mistakes which I will cover when I discuss how to correct mistakes.

Form I-9’s are not trivial. They are to be taken seriously by every employer in the U.S. Today, I just covered the reasons why we need to fill them out and what happens when we don’t. Future posts and podcasts will discuss exactly how to fill out the form, how to conduct an internal audit, how to make make corrections, and the filing and retention requirements.

It’s a big deal that could potentially put a company out of business and will require several posts and episodes to fully cover the topic.